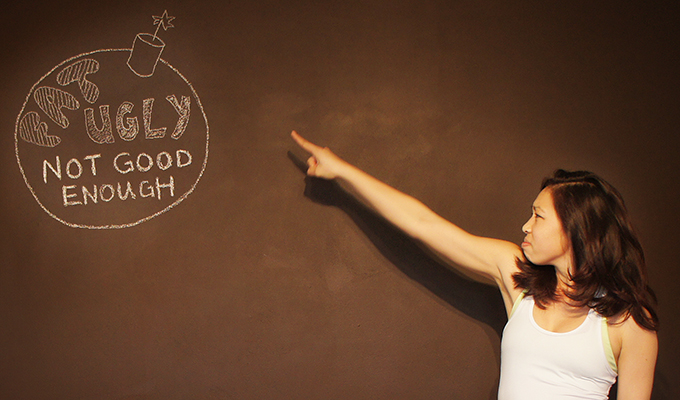 This destructive body image bomb is no match for Jackelyn Ho.

Like many relationships in today’s world, I first met Fiterazzi Magazine founder Jackelyn Ho “virtually” when I hired her to do a week-long Instagram takeover for my former employer. I was super impressed with her bold mission, passion and talent.  Because we’re both in the San Francisco bay area, and taking a relationship from virtual to reality is always a plus, we wanted to meet in person. When our schedules finally synced, I was a free agent. One thing led to another, and shortly thereafter we kicked our working relationship up a notch.

Fast forward through several months of collaborating on brand strategy, social campaigns and partnerships to the recent news that Fiterazzi has merged with Spright. Given the BIG leap this was for Jackelyn, I invited her to visit BIGthinkster Lab, chat about changes underway for her and Fiterazzi, and have fun in front of the Magic Chocolate Chalk Wall.

You went straight from college to founding Fiterazzi. That takes guts! What gave you the courage to take that path rather than looking for employment?

To be completely honest, Fiterazzi started out as a post-college hobby. I wasn’t exactly sure what career I wanted because I was stuck between two passions of teaching group fitness and being a writer. Naturally, I just combined it all together. I spent my time creating this site about positive body image because I genuinely thought it was something that needed to be out there. I guess it felt like a natural next step! Sometimes, your beating heart is a lot more opinionated than your analytical mind…

What inspired your Fiterazzi mission to “keep it real” and create content/conversation focused on positive body image?

I spend a lot of time in the gym teaching group fitness classes and being around fitness enthusiasts. The gym was a place that was created so that people could work on their health and well being, but over time it’s become a place of vanity and obsession with physical appearance. It’s interesting that “good health” pairs itself with “looking slim,” but there are many of us out there for which this is NOT the case. When you are in the minority for something like this, it does not feel good. So, I met tons of people through my classes that were unhappy with their appearance, regardless of the fact that they are completely capable of doing a 1-hour high-intensity cardio kickboxing class. It baffled me. In my eyes, they were fit, fearless and incredible. I hated hearing them say that they didn’t like the “flab” on their abs. How could they not see beyond all of that?

As a result, I created Fiterazzi’s “keep it real” mission because the normal human being doesn’t look like what many magazines and ads make humans out to be. I didn’t want my friends and family to go on thinking that they needed to look like that person in the paper. Yes, I wanted everyone to love their bodies, but I also wanted everyone to be real with themselves. Yes, you need to work out and eat healthy in order to maintain good health. But hey, that doesn’t mean you can’t have that incredible burger and a drink every now and then. Life is about living fully, not restricting yourself. Let’s just be real with ourselves and each other. That’s how we can make true progress.

Fierce and fighting back.

You’re super fit and lovely (inside and out), so some might wonder why body image would be a hot button for you. Did you ever struggle with body image?

Awww, thank you, Michelle! You know, I will admit that I was quite slender growing up. It was just part of my genetics. I never really thought about body image or what I ate or really about how I looked. I was active during my whole childhood so I felt like I had other things to worry about. I do remember, as I got into my teenage years, that my chest hadn’t really grown in and I recall that being an issue at one point, but honestly it didn’t ever really affect me. I think that most of my troubles with growing up had to do more with feeling like I wasn’t enough. It wasn’t a physical worry, but more of an emotional fear that I would never achieve a life I wanted to live. So I spent a lot of my energy in that sector of life and I’m still working on it now. It’s not very different compared to body image, though. It’s the same mindset that we think we are not enough in some way, shape or form. I just wanted everyone to know that they are enough. And if I could persuade at least one person (including myself) then I would finally be content. 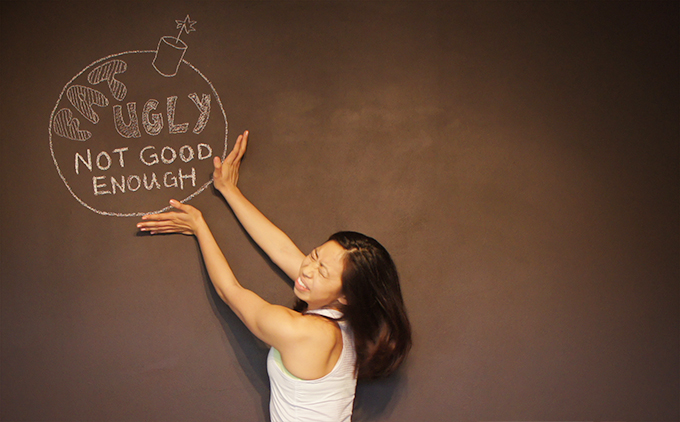 So you launched Fiterazzi in January 2014 and built it on a shoestring while teaching group fitness to make ends meet. Then Fiterazzi (and you) joined forces with Spright in February 2015. That’s amazing! What advice do you have for other BIGthinksters who want to pursue something—personally or professionally—that they’re passionate about?

Launching on a shoestring was not easy. I just felt like this project was something that I really wanted to do. And I guess that’s all there is to it. If you really want to do something, you have to ask yourself, “What is holding me back?” If your list of reasons is actually just a list of excuses, then you have to throw those excuses away and just go for it. What’s the worst that could happen? You fail. Sure, that’s scary but at least you tried. You’ll never know if you are living the life you want to live if you don’t at least try to live it.

You’ve told me you feel a strong sense of responsibility to create content that instills self-love and acceptance. Now that Fiterazzi is taking on a new life, how do you envision continuing your mission?

I hope that with Spright we are able to continue writing about topics that affect everybody. We are still in the early stages of building the brand and developing the voice, but I know that over time body image is a topic that will forever be important to me. I’m never going to stop talking about these topics on my personal platform and I really encourage everyone to take small steps to changing the verbiage we use when describing ourselves. I don’t have a written plan, but my mission is to be the little voice inside someone’s head saying, “You are extremely, completely and fully beautiful in every single way.”